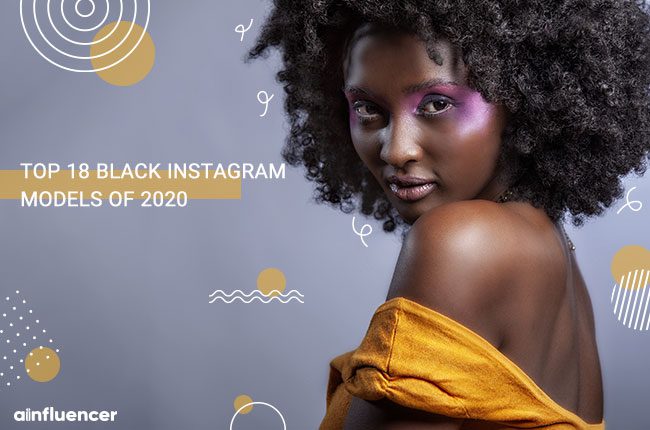 A practical and easiest way to grow your business is by using social media, especially Instagram. Today every person has a cellphone, and it is easy to present yourself in front of the eyes of millions of people. Modeling is an excellent industry that a lot of male and female models take part in. In addition, black Instagram models are competing in this industry.

Instagram is a photo and video-sharing social media that is capable of sharing millions of posts per second. This application was founded in 2010, and it rapidly gained one million registered users per month. Instagram can share millions of stories in the blink of an eye and is one of the biggest social media platforms with 1 billion monthly active users.

Today a lot of typical people do peculiar things and post them on social media – why? Fame serves the purpose. They want to separate themselves from the anonymity of the people and get people’s attention.

Maybe the most significant negative idea that has permeated society is that there is no way to get famous quickly and get rich! Posting many things, a lot of comments, and getting a lot of likes seems impossible?

Naomi Campbell stands in first place on our top black Instagram models list. Naomi was born in England, and she is a professional 39-year-old model. She was the daughter of Jamaican dancer Valleri Moris. However, Naomi’s father left the family when the mother was four months pregnant.

Naomi emerged in 1978 at the age of seven; she was featured in the program Bob Marly. In 2018, Naomi received the best and brightest fashion awards from the international community.

Ulises has second place in the top 20 black Instagram models. Ulises started doing bodybuilding when he went to high school in 1995. He was always into sports such as American football, track, and field. However, he was a skinny kid and not appropriate for demanding sports.

My overall motivation is to be a part of history and be compared with legends.

Ulises JR is famous for his great 8-pack stomach muscles

Tyra Banks takes third place in the top 20 black Instagram models. Tyra Banks was born on December 4 in 1973, in California. Her father abandoned the family when Tyra was only 6 years old. This matter affected her childhood negatively, and she said: “As far as I could see, I had it made.”

She became the first black and black bikini model on Instagram who landed on the Sports Illustrated Swimsuit Issue cover. Tyra started a new TV program America.’s Next Top Model. She won two Emmy awards and also launched her own cosmetics in 2014. In addition to the business, Tyra published her book called Modelland based on her experiences in modeling.

Jeremy takes fourth place in the top 20 Instagram models black. He was born in Tacoma, Washington, in 1984. Also, Meeks was a former member of the group Crips. He got involved with a gang called Ceasefire operation in Stoken and got famous. Also, he is one of the hottest black models and received a 27-month sentence, and it was the start of being famous.

Jeremy was known as “Hot felon” and signed a modeling contract with White Cross Management.

In 2017, He got a title from Vogue magazine and called “buff bad boy.” In August 2017, Jeremy walked for German fashion designer Philipp Plein during Milan Fashion Week. Meeks also appeared in a campaign for Isreal sunglasses fashion.

Adut Akech is the fifth place in the top 20 black models on Instagram. She was born in South Sudan, and her family escaped from the civil war in Sudan. At age 12, she took part in a fashion show.

She wants to be the next Naomi Campbell. In addition, she cooperated with the Office of the UN High commissioner for refugees. Also, she has big plans ahead. Adut wants to get a diploma in entrepreneurship and open a business related to fashion.

Lira Mercer is one of the hottest thick black ig models, and that’s not the end of the story. With a net worth of 300 thousand dollars, she is a thriving black lady and hot black girl on Instagram who is undoubtedly a dream girl. She became famous after collaborating with a hip-hop weekly magazine and shooting some amazing photos for them. She hasn’t settled down and is even trying to find her way to TV and become a TV star from that point on.

Ladies and gentlemen, not only Rae King is on our list of hot black models; without a doubt, she is the most irresistible one!
This lady is among the most attractive ebony Instagram models, along with a fantastic taste of fashion and style that shines throughout her Instagram account.

How to find brands on Instagram to work with?